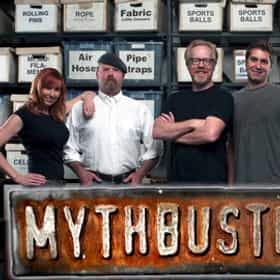 MythBusters is a science entertainment television program created by Peter Rees and produced by Australia's Beyond Television Productions for the Discovery Channel. The series is transmitted by numerous international broadcasters, including SBS Australia, and other Discovery channels worldwide. The show's hosts, special effects experts Adam Savage and Jamie Hyneman, use elements of the scientific method to test the validity of rumors, myths, movie scenes, adages, Internet videos, and news stories. The show is one of the oldest—and the most popular—on Discovery Channel currently in production, being preceded only by How It's Made in the US and Daily Planet in Canada. Filming is based in ... more on Wikipedia

20 Mythbusters Myths You Were Saddest to See Busted 31k votes After 14 seasons of scientific mayhem, Mythbusters is coming to a glorious end in 2016. Since 2003, Adam, Jamie, and the res...
The Best MythBusters Episodes 1.2k votes List of the best MythBusters episodes, as voted on by other fans of the series. Fans will also enjoy myths you were sad to s...
The Best Seasons of MythBusters 73 votes Ranking of the best seasons of MythBusters, listed from best to worst with poster images when available. People who are fana...

MythBusters is ranked on...