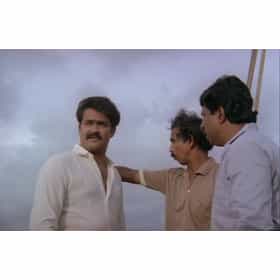 Nadodikattu is a 1987 Indian Malayalam satirical comedy film directed by Sathyan Anthikkad and written by Sreenivasan based on a story by the Siddique-Lal duo. The story revolves around two impecunious young Indian men, Ramdas and Vijayan who not being able to find any job in Kerala, plan to immigrate to Dubai to make their fortunes, but get deceived and they end up in the neighbouring state of Tamil Nadu. Nadodikattu drew upon relevant social factors affecting Kerala of the 1980s such as widespread unemployment and poverty. The film also stars Thilakan, Shobhana, Innocent, Mamukkoya, Captain Raju, Meenakumari, Kundara Johny, Janardhanan, Ajith Kollam and Sankaradi in pivotal roles ... more on Wikipedia

Nadodikattu is also found on...