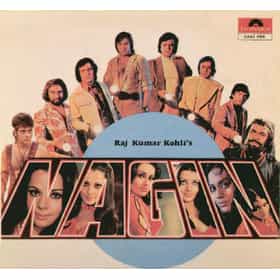 Nagin is a 1976 Hindi horror fantasy thriller film produced and directed by Rajkumar Kohli. It features a huge ensemble cast including Sunil Dutt, Reena Roy, Jeetendra, Feroz Khan, Sanjay Khan, Vinod Mehra, Kabir Bedi, Rekha, Yogeeta Bali and Mumtaz. The film was declared a super hit by Box Office India. It was inspired by François Truffaut's film The Bride Wore Black, based on Cornell Woolrich's novel of the same name. The film was later remade in Telugu as Devathalara Deevinchandi with Jayamalini in the Nagin role. It was also remade in Tamil with Sripriya playing the Nagin role in the film Neeya. Later Rajkumar Kohli re-made this film in 2002 with his son and other starcast, ... more on Wikipedia

Nagin is ranked on...

Nagin is also found on...