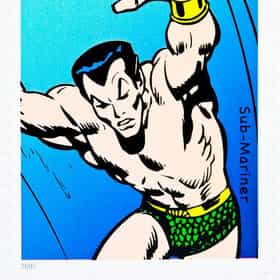 Namor the Sub-Mariner is a fictional superhero, sometime antihero and in a handful of instances supervillain that appears in comic books published by Marvel Comics. Debuting in early 1939, the character was created by writer-artist Bill Everett for Funnies Inc., one of the first "packagers" in the early days of comic books that supplied comics on demand to publishers looking to enter the new medium. Initially created for the unreleased comic Motion Picture Funnies Weekly, the Sub-Mariner first appeared publicly in Marvel Comics #1 – the first comic book from Timely Comics, the 1930s–1940s predecessor of the company Marvel Comics. During that period, known to historians and ... more on Wikipedia

Namor is ranked on...