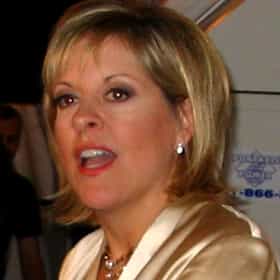 Nancy Ann Grace (born October 23, 1959) is an American legal commentator and television journalist. She was the host of Nancy Grace from 2005 to 2016, which was a nightly celebrity news and current affairs show on HLN, and she was the host of Court TV's Closing Arguments (1996–2007) as well. She also co-wrote the book Objection!: How High-Priced Defense Attorneys, Celebrity Defendants, and a 24/7 Media Have Hijacked Our Criminal Justice System. Grace was also the arbiter of Swift Justice with Nancy Grace in the syndicated courtroom reality show's first season. Grace was formerly a prosecutor in a local district attorney's office in Atlanta, Georgia. She frequently discusses issues from ... more on Wikipedia

Nancy Grace is ranked on...

#117 of 531 Annoying Celebrities Who Should Just Go Away Already 1.2M VOTES The most annoying celebrities, ranked by entertainment fans themselves. These annoying celebs are obnoxious, overexposed, ...
#32 of 45 People who voted for Nancy Grace... People in the Northeast are 4x more likely to vote for this also upvote Chris Christie on The Best 2016 Presidential Candidates The Most Trustworthy Newscasters on TV Today 44.5k VOTES Who are the most trustworthy anchors and news personalities today? We all know the names Walter Cronkite, Edward R. Murrow, ...
#50 of 50 Favorite Good Morning America Hosts 8.9k VOTES List of your favorite "Good Morning America" hosts. Here are the top hosts, ranked in order of popularity, who hav...
275+ Celebrities with Twin Children 394.8k VIEWS List of celebrities who have twin children, along with the names of the kids, their years of birth, and their other parent...
42 Celebrity Women Who Gave Birth After 40 79.9k VIEWS List of Celebrity Women Who Gave Birth After 40, ranked by fame and popularity. Studies have shown that women are now waitin...
Famous People Named Nancy 14.4k VIEWS List of famous people named Nancy, along with photos. How many celebrities named Nancy can you think of? The famous Nancys b...
7 Famous People Who Lost Fiances 25.1k VIEWS List of celebrities who lost fiances or significant others, loosely ranked by fame and popularity. A few famous people hav...
27 of the Most Famous ESTJs 44.3k VIEWS Many famous actors, musicians, and politicians are believed to be ESTJs (Extraverted Sensing Thinking Judging). ESTJs are kn...
#35 of 44 Seinfeld's Loves & Hookups 14.4k VOTES All the girlfriends and ex-girlfriends Seinfeld had on the show. The fictional Jerry Seinfeld had everything from relationsh...

Nancy Grace is also found on...