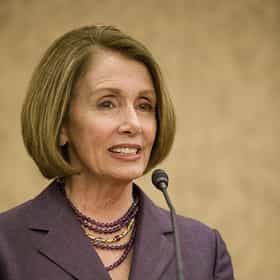 Nancy Patricia Pelosi (born March 26, 1940) is an American politician and a member of the Democratic Party. She has served as speaker of the United States House of Representatives since January 2019, is the only woman to have held that office, and is the highest-ranking elected woman in United States history. As speaker of the House, she is second in the presidential line of succession, immediately after the vice president.First elected to Congress in 1987, Pelosi is currently in her 17th term as a congresswoman, representing California's 12th congressional district (since 2013), which consists of four-fifths of the city and county of San Francisco. She initially represented the 5th ... more on Wikipedia

Nancy Pelosi is ranked on...

#481 of 1,042 Celebrity Death Pool 2020 42.4k VOTES They may be beloved performers, award winners, or game changers, but no matter how famous, you can’t escape death. This cele...
#4 of 223 Lying Politicians: The Worst Liars In American Politics 430.6k VOTES Do any politicians tell the truth anymore? Maybe, but you won't find them here. This list has the least trustworthy people i...
#159 of 265 The Most Influential Politicians in American History 160.2k VOTES The most influential politicians in American history, ranked by everyone. Anyone can vote on this list, making these ranking...
#128 of 836 The Scariest Threats to the United States 226.3k VOTES Lots of stuff to be scared of these days... more than usual, even in our normal fear-based-economy. The media and the pundit...
#122 of 571 Things That Are Not As Cool As People Think They Are 1.1M VOTES Jorts are the dumbest things I've ever seen. Next to Toms shoes. Next to the Toyota Prius. Next to d-bags taking pictures of...
#11 of 104 The Most Annoying Politicians Currently in Office 82.8k VOTES Annoying politicians are a fact of life in these United States. In a time when the gulf between the two major parties has ne...
#15 of 25 The Most Influential People in 2019 43.2k VOTES Oscar winners, musicians, political figures, and activists, just about any celebrities have the power to be the most influen...
#15 of 61 The Most Influential Women Of 2018 57.2k VOTES The greatest women in history change the game in terms of the power and the presence women have in society. From inspiration...
#114 of 166 The Most Ridiculous Political Pundits 162.6k VOTES This is a bipartisan list of the most over-the-top, spittle-stained, fist-thumping, hyperbolic political pundits of all ti...
#232 of 267 People who voted for Nancy Pelosi... People in the Northeast are 2x more likely to vote for this The Most Powerful Women Of All Time 176.2k VOTES This is a list of the most powerful women of all time, as ranked by experts and by fans alike. From world leaders to celeb...
#21 of 99 Time's 100 Most Influential People Of 2019, Ranked 23k VOTES From actors and singers to activists and politicians, here is Time's 100 Most Influential People of 2019. While you mig...
#12 of 37 37 Glorious Vintage Photos of US Politicians 98k VOTES Enjoy these vintage picturess of politicians when they were young. This list features politicians' high school yearbook pict...
#3 of 51 The Most Important Politicians Of 2019 17.4k VOTES Voting is an integral part of any democracy. And now, you have the power to vote for the individuals you believe to be the m...
#131 of 1,452 Celebrity Death Pool 2018 477.7k VOTES Welcome to Celebrity Death Pool 2018! In increasingly uncertain times, there remains one constant in life - we all die. Cele...
#20 of 95 The Most Influential Women of 2019 49.2k VOTES UPDATED: Check out the most influential women of 2020! From inspirational female celebrities to businesswomen to political...
#7 of 18 Things That Were A Thing: January 2019 Edition 1.8k VOTES What happened in January? The first month of the year is always rough, but here you will find the most notable January 2019 ...
#394 of 868 Celebrity Death Pool 2016 370.1k VOTES Celebrity death pool 2016: Here's a large list of celebrities we think just might die this year. The only certainties in l...
#57 of 81 Celebrities Who Made The Biggest Cultural Impact In 2017 5.7k VOTES The celebrities who influenced culture in 2017 were fashion innovators, outspoken activists, social media influencers, cutti...
#38 of 113 People who voted for Nancy Pelosi... People over 50 are 3x more likely to vote for this People We Loved to Hate in 2013 40.4k VOTES These are the People we loved to hate in 2013. This list includes a slew of shocking, disheartening and downright dirty happ...
#17 of 99 US Political Figures We Hate the Most: 2013 28.5k VOTES I'm starting this list with the political figures I hate the most, but I'm opening it to voting and to the public. Obviously...
#10 of 17 Here's What American Politicians Think About The 2019 Government Shutdown 2.8k VOTES On December 22, 2018, the US government shut down. The partial shutdown hinged on President Trump's request for over $5 bill...
#4 of 13 US Politicians' Reactions To President Trump's State Of The Union 7.4k VOTES For some, trying to find a concise way to describe their feelings on the state of American politics is near impossible....
#7 of 29 Politicians' Voting Record on the Environment 1.9k VOTES The voting record of politicians on issues related to the environment and climate change almost always goes by party lines. ...
Celebrities Turning 80 In 2020 2.3k VIEWS In 2020, celebrities born in 1940 turn 80 years old. This is a huge milestone, and what's even more impressive is that a few...
The Current Presidential Line of Succession 52.6k VIEWS List of the people in the line of succession to become President of the United States upon the death, incapacity, resignat...
Famous People Named Nancy 14.4k VIEWS List of famous people named Nancy, along with photos. How many celebrities named Nancy can you think of? The famous Nancys b...
35 of the Most Famous ENTJs 67.6k VIEWS Several famous actors, actresses, and politicians are believed to be ENTJs (Extraverted Intuitive Thinking Judging). ENTJs a...
2011 College Graduation Speakers 21.3k VIEWS We've compiled the most comprehensive list of commencement speakers for 2011 across all universities that we could put toget...

Nancy Pelosi is also found on...