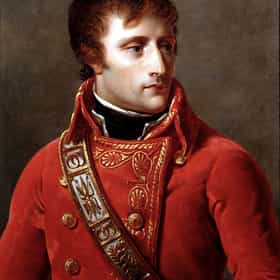 Napoleon Bonaparte (, French: [napɔleɔ̃ bɔnɑpaʁt]; Italian: Napoleone di Buonaparte, pronounced [napoleˈone di bwɔnaˈparte]; 15 August 1769 – 5 May 1821) was a French statesman and military leader of Italian descent who rose to prominence during the French Revolution and led several successful campaigns during the French Revolutionary Wars. He was Emperor of the French as Napoleon I from 1804 until 1814 and again briefly in 1815 during the Hundred Days. Napoleon dominated European and global affairs for more than a decade while leading France against a series of coalitions in the Napoleonic Wars. He won most of these wars and the vast majority of his battles, building a large empire ... more on Wikipedia

The Rise And Fall Of Eugénie De Montijo, Whose Thirst For Power Destroyed Napoleon's Dynasty 4.4k views France under the rule of Emperor Napoleon III was an intoxicating place. Paris was alight with newly invented gas lamps and ...
Why Did Napoleon Lose The Battle Of Waterloo? 360 votes When Napoleon Bonaparte returned to France in 1815, he brought with him a Hundred Days campaign to recapture his power and g...
28 Things You Didn't Know About Napoleon 97.3k views Here’s a list for all those of Napoleon Bonaparte biography and historical facts fans. Who was Napoleon? A lot of Napoleon f...
The Best Actors Who Played Napoleon Bonaparte 569 votes Something about Napoléon Bonaparte and his rise to power seems to inspire the imagination. The French military leader...

Napoleon Bonaparte is ranked on...

Napoleon Bonaparte is also found on...