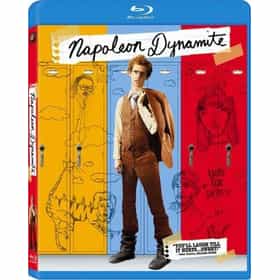 Napoleon Dynamite is a 2004 American independent art-house comedy film written by Jared and Jerusha Hess and directed by Jared. The film stars Jon Heder in the role of the title character, for which he was paid $1,000. After the film's runaway success, Heder re-negotiated his compensation and received a cut of the profits. The film was Jared Hess' first full-length feature and is partially adapted from his earlier short film, Peluca. Napoleon Dynamite was acquired at the Sundance Film Festival by Fox Searchlight Pictures and Paramount Pictures, in association with MTV Films. It was filmed in and near Franklin County, Idaho in the summer of 2003. It debuted at the Sundance Film Festival ... more on Wikipedia

Napoleon Dynamite is ranked on...

Napoleon Dynamite is also found on...