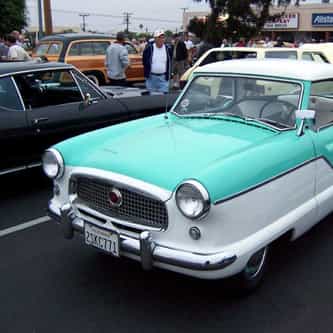 The Nash Metropolitan is a car that was sold, initially, only in the United States and Canada, from 1954–62. It conforms to two classes of vehicle: economy car and subcompact car. In today’s terminology the Metropolitan is a “subcompact”, but this category had not yet come into use when the car was made. At that time, it was variously categorized, for example as a "small automobile" as well as an "economy car". The Metropolitan was also sold as a Hudson when Nash and ... more on Wikipedia