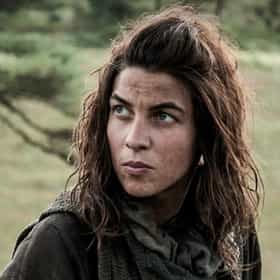 Natalia Gastiain Tena (born 1 November 1984) is an English actress and musician. She played Nymphadora Tonks in the Harry Potter film series, and the wildling Osha in the HBO series Game of Thrones. Tena is the lead singer and accordionist of Molotov Jukebox. The band released their debut album Carnival Flower (2014), in Spring 2014, featuring their single "Neon Lights". Their second studio album, Tropical Gypsy (2016), was released on 15 April 2016 and was preceded by its lead single, "Pineapple Girl". It was promoted on the band's Tropical Gypsy Tour in April and May 2016. ... more on Wikipedia

Natalia Tena is ranked on...

#13 of 20 Guest Stars In 'The Mandalorian,' Ranked By How Surprised You Were To See Them 12.2k VOTES When The Mandalorian finally arrived on television sets, phones, tablets, and computer screens everywhere, it was ...
#3 of 12 Game of Thrones Actors Who Have Been in Romcoms 528 VOTES Ah, it’s time to leave the “t*ts and dragons” behind and enjoy a little romantic comedy brought to you by the heroes and vil...
The Cast of Harry Potter: Where Are They Now? 5M VIEWS When J.K. Rowling’s wildly-popular and bestselling Harry Potter book series was adapted for the screen, fans finally got to ...
Famous People Named Natalia 5.8k VIEWS Have you ever realized how many famous people named Natalia there are? We put together this list of celebrities named Natali...

Natalia Tena is also found on...