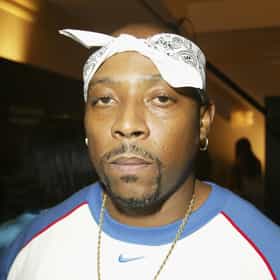 Nathaniel Dwayne Hale (August 19, 1969 – March 15, 2011), known professionally as Nate Dogg, was an American singer, rapper, songwriter, and actor. Hale began his career as a member of the California rap trio 213, alongside his longtime friend Warren G and cousin Snoop Dogg. He eventually pursued a solo career, and released three solo albums, G-Funk Classics, Vol. 1 & 2 in 1998, Music & Me in 2001, and Nate Dogg as a bootlegged album in 2003 and on CD in 2014. He was known for his deep, low-pitched singing voice, and for performing hooks, frequently collaborating with other artists such as Dr. Dre, Eminem, Warren G, Tupac Shakur, Westside Connection, Snoop Dogg, 50 Cent, ... more on Wikipedia

Nate Dogg is ranked on...

#23 of 508 The Greatest Rappers Of All Time 6.3M VOTES Finally, a definitive list of the best rappers of all time, ranked by fans all over the world. From the early '80s to pres...
#12 of 139 The Dopest Rappers of the '90s 239.7k VOTES The best '90s rappers and rap groups brought us some of the best rap songs of all time with artists like Tupac Shakur, Dr. D...
#325 of 329 The Best Bands With Animal Names 32.3k VOTES The best bands with animals in their names criss-cross the music world with offerings from music genres like indie rock, cla...
#10 of 187 The Best Rappers From Los Angeles 17.2k VOTES From new artists to some of the greatest hip hop artists of all time, here are the best rappers from Los Angeles. Including&...
#5 of 114 Rappers with the Best Voices, Ranked 34.3k VOTES When ranking the best rap artists, the rapper's voice is an important factor in determining which hip hop artists stand...
#13 of 192 The Most Respected Rappers, Ranked 40.3k VOTES When it comes to the rap game, it's all about respect. In other words, a rapper's career will only go so far if they aren't ...
#4 of 43 The Greatest Rappers Who Are Already Dead 64.2k VOTES The Notorious B.I.G. once rapped, "I wonder if I died / Would tears come to her eyes / Forgive me for my disrespect / F...
#2 of 27 The Best Rappers Named After Animals 1.5k VOTES Here are the best rappers with animals in their names. The following hip hop artists are all famous rappers whose names have...
#4 of 75 Hip Hop Stars You Most Wish You Could Sound Like 25.4k VOTES If you could roll up to a party and magically have the skills and voice of any MC, rapper, or hip hop artist, who would...
#10 of 199 The Best Old School Hip Hop Groups/Rappers 149.6k VOTES If you're a fan of rap music, you should have at minimum a base knowledge in old school rap. If not for old school rappers, ...
#15 of 88 The Greatest Gangsta Rappers of All Time 108k VOTES If you were a fan of West Coast rap at the end of the 1980s and early 1990s, the odds are pretty high that you're familiar w...
#8 of 138 The Best West Coast Rappers 149.2k VOTES The golden age of hip hop is often associated with the East Coast - however, that doesn't mean that West Coast rappers were ...
#26 of 100 The Best Musical Artists From Mississippi 1k VOTES Here are the best artists and bands from Mississippi. A largely rural state primarily known for the massive river beari...
#2 of 38 The Best G-Funk Rappers 2.3k VOTES At the onset of gangster rap and west coast rap, there was a subgenre that emerged that captured the laidback vibes of the h...
The Real Names of 150 Rappers 519.6k VIEWS This list of the real names of rappers will inform and enlighten you, because who even knew some of the best rappers in hist...
Celebrities Who Were In The Military 7.7M VIEWS The many celebrities who were in the military signed up to make the ultimate sacrifice for their countries. Through the year...
Famous People Named Nathan 26.8k VIEWS List of famous people named Nathan, along with photos. How many celebrities named Nate can you think of? The famous Nathans ...
#2 of 24 The Best Rappers From Long Beach 892 VOTES From new artists to some of the greatest hip hop artists of all time, here are the best rappers from Long Beach. Including&n...
Kids of Dead Musicians: How Are They Doing Today? 721.7k VIEWS Music can transform the soul and the musicians who write, produce, sing, and play our favorite songs can feel like a best ...
24 Rappers Who Are Leos 808 VIEWS This list features famous Leo rappers ranked by fame and popularity. Charismatic, caring, and honest, Leos have several pers...
Rappers Who Died Young 1.1M VIEWS Biggie Smalls once rapped, "It don't make sense / Goin' to Heaven with the goodie goodies / Dressed in white / I like b...
Rappers Who Are Associated with the Crips 261.8k VIEWS Famous rappers and hip hop artists who are Crips often openly associate with the gang, mentioning it in their lyrics an...

Nate Dogg is also found on...