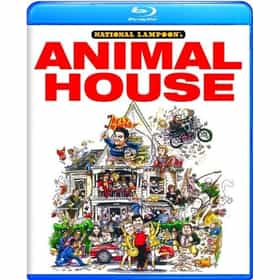 National Lampoon's Animal House is a 1978 American comedy film directed by John Landis. The film was a direct spinoff from National Lampoon magazine. It is about a misfit group of fraternity members who challenge the dean of Faber College. The screenplay was adapted by Douglas Kenney, Chris Miller, and Harold Ramis from stories written by Miller and published in National Lampoon magazine. The stories were based on Miller's experiences in the Alpha Delta Phi fraternity at Dartmouth College. Other influences on the film came from Ramis's experiences in the Zeta Beta Tau fraternity at Washington University in St. Louis, and producer Ivan Reitman's experiences at Delta Upsilon at McMaster ... more on Wikipedia

Behind The Scenes Stories From 'Animal House' That Are Way More Insane Than The Movie 117.6k views Many a dorm room wall has sported the inescpable image of John Belushi wearing his Animal House COLLEGE sweatshirt, putting ...
"Animal House" Somehow Has More Sexism, Racism, And Animal Cruelty Than You Remember 6.2k views National Lampoon's Animal House is widely considered one of the best comedies of the '70s, and in 2008, Empire magazine went...