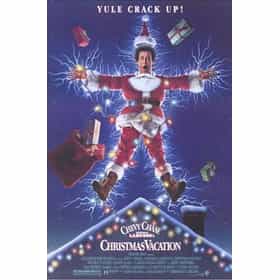 National Lampoon's Christmas Vacation is a 1989 Christmas comedy film directed by Jeremiah S. Chechik. It is the third installment in National Lampoon's Vacation film series, and was written by John Hughes, based on his short story in National Lampoon magazine, "Christmas '59". The film stars Chevy Chase, Beverly D'Angelo and Randy Quaid, with Juliette Lewis and Johnny Galecki as the Griswold children Audrey and Rusty, respectively. Since its release in 1989, Christmas Vacation has often been labeled as a modern Christmas classic. The film has achieved three home video releases: VHS and Laserdisc in early 1990, and a "Special Edition" DVD in 2003. In 2009, the film ... more on Wikipedia