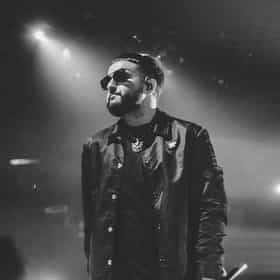 Navraj Singh Goraya (born November 3, 1989), better known by his stage name Nav (stylized as NAV or ΠΔV), is a Canadian rapper, singer, songwriter and record producer of Indian Punjabi descent. He is signed to XO and Republic Records. In September 2015, Nav released one of his earliest songs to his SoundCloud account, called "Take Me Simple", which has been listened to over ten million times. In July 2015, Nav contributed production to Drake's diss of Meek Mill, "Back to Back". In 2016, "Take Me Simple" and "The Man" were featured on Drake's OVO Sound Radio on Beats 1. In September 2016, Nav collaborated with American rapper Travis Scott on ... more on Wikipedia

#381 of 508 The Greatest Rappers Of All Time 6.3M VOTES Finally, a definitive list of the best rappers of all time, ranked by fans all over the world. From the early '80s to pres...
#89 of 195 The Best New School Rappers 500.9k VOTES Hip hop heads, who are the best new school rappers? Making the best and newest rap songs of 2018, these rising hiphop kings ...
#760 of 1,069 The Worst Bands of All Time 1.3M VOTES The worst bands in music history, ranked by music fans (and haters.) This list contains the most awful bands to listen to fr...
#167 of 513 The Worst Rappers of All Time 568.6k VOTES Featuring SoundCloud rappers who went mainstream to YouTubers who also rap (sort of), this is the definitive list of th...
#93 of 114 Rappers with the Best Voices, Ranked 34.3k VOTES When ranking the best rap artists, the rapper's voice is an important factor in determining which hip hop artists stand...
#141 of 192 The Most Respected Rappers, Ranked 40.3k VOTES When it comes to the rap game, it's all about respect. In other words, a rapper's career will only go so far if they aren't ...
#35 of 51 The Best Emo Rap Artists 45.2k VOTES With the rise of SoundCloud rappers, a new hip hop subgenre called emo rap was born. Dropping the best emo rap son...
#36 of 88 The Best Canadian Rappers 62k VOTES This list of great Canadian rappers is longer than you might think. While initially, the pool of popular rappers from Cana...
#81 of 101 The Best Rappers Of 2019, Ranked 473k VOTES Updated: check out our list of the top 50 hip hop artists of 2020! Dropping the hottest new music, here are the best rappe...
Famous Scorpio Male Celebrities 27.8k VIEWS Driven by their passions, resourceful and fiercely independent, the personality of a Scorpio seems tailor-made for celebrity...
#21 of 28 The Best Rappers To Listen To If You Like Drake 1.1k VOTES If you're a fan of Drake, here is a list of rappers who make similar music. Known for his catchy hooks and smooth beats...