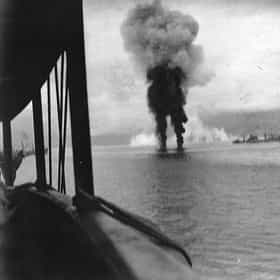 The Naval Battle of Guadalcanal, sometimes referred to as the Third and Fourth Battles of Savo Island, the Battle of the Solomons, the Battle of Friday the 13th, or, in Japanese sources, the Third Battle of the Solomon Sea, took place from 12–15 November 1942, and was the decisive engagement in a series of naval battles between Allied and Imperial Japanese forces during the months-long Guadalcanal Campaign in the Solomon Islands during World War II. The action consisted of combined air and sea engagements over four days, most near Guadalcanal and all related to a Japanese effort to reinforce land forces on the island. The only two U.S. Navy admirals to be killed in a surface engagement ... more on Wikipedia

Naval Battle of Guadalcanal is also found on...