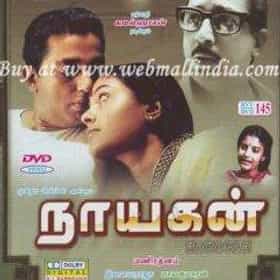 Nayakan, also known as Nayagan, is a 1987 Indian Tamil crime drama film written and directed by Mani Ratnam and starring Kamal Haasan. It is loosely based on the real-life Bombay underworld don Varadarajan Mudaliar, and sympathetically depicts the struggle of South Indians living in Bombay. The film also stars Saranya Ponvannan in her film debut. Karthika, Nassar, Janagaraj, Delhi Ganesh and Tinnu Anand play significant roles. The soundtrack and score of the film were composed by Ilaiyaraaja and was met with a successful response after release. The film has been inspired from the 1972 American film The Godfather. Principal photography commenced in November 1986 with test shoots ... more on Wikipedia

Nayakan is ranked on...

Nayakan is also found on...