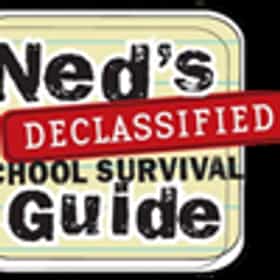 Ned's Declassified School Survival Guide is an American live action sitcom on Nickelodeon that debuted in the Nickelodeon Sunday night TEENick scheduling block on September 12, 2004. The series' actual pilot episode aired on September 7, 2003 without many of the current version's main characters. The main series finale aired on June 8, 2007. The show was produced by Apollo ProScreen GmbH & Co. Filmproduktion KG in association with Jack Mackie Pictures. Its main executive producer and creator is Scott Fellows, the head writer for The Fairly OddParents. ... more on Wikipedia

#21 of 103 The Best Nickelodeon Original Shows 174.4k VOTES Nickelodeon, also sometimes referred to as “Nick” is an American paid cable and satellite TV network which specifically cate...
#992 of 2,286 The Greatest TV Shows Of All Time 1.4M VOTES Choosing the best TV shows of all time means taking into account the best TV dramas, the best TV comedies, the best cartoons...
#288 of 1,328 The Best Guilty Pleasure TV Shows 19.5k VOTES List of the best guilty pleasure TV shows, past and present, including sitcoms, dramas, reality shows, and game shows. These...
#112 of 237 The Best Cartoons to Watch Stoned 62.9k VOTES Do you often wonder, “what are the best shows to watch high?” Or, more specifically, “what are the best cartoons to watch hi...
#22 of 44 What to Watch If You Love 'SpongeBob SquarePants' 121 VOTES SpongeBob SquarePants is a witty yet hilarious children's cartoon that garnered the love and affection of hordes of fan...
#20 of 104 The Best Teen Comedy Series Ever Made 3.3k VOTES Comedy series for teens have to walk a delicate line, not being so childish they’re off-putting to their audience, but also ...
#16 of 87 The Best Teen Sitcoms of All Time 24.1k VOTES The best teen sitcoms serve not only as a reflection of teen life but also an educational tool. They’re filled with moral an...
#6 of 38 The Best TeenNick TV Shows 25.1k VOTES List of popular TeenNick shows, ranked from best to worst. This list of the top current and cancelled TeenNick TV series inc...
#13 of 27 The Best The N TV Shows 2.2k VOTES List of popular The N shows, ranked from best to worst. This list of the top The N TV series, both current and cancelled sho...
#29 of 61 The Funniest Kids Shows Ever Made 3.3k VOTES Kids love to laugh. While their parents may try to get them to watch educational programming, kids just want to change the c...
#7 of 41 The Best 2000s Nickelodeon Shows 50.3k VOTES   These are the best 2000s Nickelodeon shows, ranked from best to worst by user votes. Some top 2000s Nickelodeon sho...
#13 of 30 Good TV Shows for 8 Year Olds 344 VOTES Figuring out the best TV shows for 8-year-olds to watch can be complicated. Right at the cusp of being a tween, they know wh...