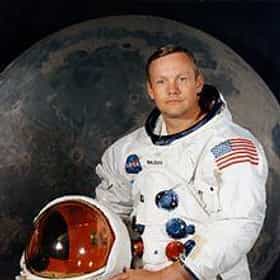 Neil Alden Armstrong (August 5, 1930 – August 25, 2012) was an American astronaut and aeronautical engineer who was the first person to walk on the Moon. He was also a naval aviator, test pilot, and university professor. A graduate of Purdue University, Armstrong studied aeronautical engineering; his college tuition was paid for by the U.S. Navy under the Holloway Plan. He became a midshipman in 1949 and a naval aviator the following year. He saw action in the Korean War, flying the Grumman F9F Panther from the aircraft carrier USS Essex. In September 1951, while making a low bombing run, Armstrong's aircraft was damaged when it collided with an anti-aircraft cable which cut off a ... more on Wikipedia

Neil Armstrong is ranked on...

#27 of 276 The Most Trustworthy Celebrities in the World 782.8k VOTES Trust: the belief that someone or something is reliable, good, honest, effective, etc. When it comes to celebrities, do any ...
#55 of 931 People who voted for Neil Armstrong... People over 50 are 2x more likely to vote for this People We Wish Were Still Alive 3.2M VOTES RIP to our world's greatest achievers, those who changed the way we live and the ways we thought. This list of people we wis...
#66 of 2,831 People who voted for Neil Armstrong... People in the Midwest are 2x more likely to vote for this The Most Influential People of All Time 2.4M VOTES This is a list of the most influential people of all of human history. This means that the individuals on this list have had...
#391 of 1,472 The Greatest Minds of All Time 736.2k VOTES List of the Greatest Minds of All Time, throughout history. This list represents the most influential thinkers across variou...
#122 of 474 Famous Role Models We'd Like to Meet In Person 531k VOTES These are the famous folks it would be most exciting to meet in person, as ranked by the wisdom of the crowd. Some of the be...
#23 of 66 The Most Influential People of the Cold War 11.6k VOTES The Cold War was a period of confrontation between the two superpowers of the world, the United States and the Soviet Union....
#5 of 53 The Hottest Male Astronauts in NASA History 8.8k VOTES Can you believe that humans have been to space?! It's really pretty amazing when you stop for a second and consider it. Both...
#40 of 81 Celebrities You Think Are The Most Humble 55.7k VOTES Humble: to have or show a low estimate of one's own importance. Humility is a rare virtue, particularly in a socia...
The Locations of All Hollywood Walk of Fame Stars 418k VIEWS A list of stars on the Hollywood Walk of Fame, with photos. This list includes all television and movie stars. Acquiring a s...
#22 of 118 People Who Most Deserve Biopics (But Don't Have One Yet) 48.4k VOTES Every awards season it seems countless new biopics are released about notable historical figures, celebrities, and politicia...
Famous People Named Neil 15.4k VIEWS List of famous people named Neil, along with photos. How many celebrities named Neal can you think of? The famous Neils belo...
50+ Incredible Colorized Photos from History 1.8M VIEWS We've all imagined at some point what history looked like in actual color – blues and reds and greens filling in the empty b...
People Who Have Been To Space 94.8k VIEWS These 519 space travelers have all flown in space. They're not all astronauts, the list includes people with backgrounds in ...
Famous People Whose Last Name Is Armstrong 8.2k VIEWS Being a fairly common name, it's no surprise there are a lot of famous people with the last name Armstrong. Do you recognize...
32 Famous People of German Descent 63.4k VIEWS This list of famous people of German descent ranked by fame and popularity. Many famous people are of German descent. Some o...
Famous People You Didn't Know Were Boy Scouts 217.3k VIEWS A list of famous people who were real-life scouts. This crowdranked list includes celebrities, politicians and other notab...
Male Space Travelers: A Complete List 20.1k VIEWS Complete list of all 332 male space travelers. These are people who have been to space, but aren't necessarily astronauts. I...
Celebrity Business Cards You've Never Seen Before 129.3k VIEWS Thanks to the Internet and sites like LinkedIn, does anyone really need business cards anymore? And for that matter, why wou...

Neil Armstrong is also found on...