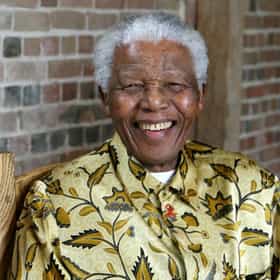 Nelson Rolihlahla Mandela (; Xhosa: [xolíɬaɬa mandɛ̂ːla]; 18 July 1918 – 5 December 2013) was a South African anti-apartheid revolutionary, political leader, and philanthropist who served as President of South Africa from 1994 to 1999. He was the country's first black head of state and the first elected in a fully representative democratic election. His government focused on dismantling the legacy of apartheid by tackling institutionalised racism and fostering racial reconciliation. Ideologically an African nationalist and socialist, he served as President of the African National Congress (ANC) party from 1991 to 1997. A Xhosa, Mandela was born to the Thembu royal family in ... more on Wikipedia

Nelson Mandela is ranked on...

#79 of 926 People who voted for Nelson Mandela... People in the Northeast are 2x more likely to vote for this Women are 2x more likely to vote for this People We Wish Were Still Alive 3.3M VOTES RIP to our world's greatest achievers, those who changed the way we live and the ways we thought. This list of people we wis...
#305 of 469 Famous Role Models We'd Like to Meet In Person 537.9k VOTES These are the famous folks it would be most exciting to meet in person, as ranked by the wisdom of the crowd. Some of the be...
#39 of 2,830 The Most Influential People of All Time 2.4M VOTES This is a list of the most influential people of all of human history. This means that the individuals on this list have had...
#85 of 525 Famous Men You'd Want to Have a Beer With 1.8M VOTES If given the opportunity to sit down for a beer with any famous male figure, which famous men would you most want to get a d...
#38 of 123 The Best African-American Characters in Film 15.8k VOTES A list of the all time greatest African American characters in film, ranked as the best in film history by movie lovers ev...
#606 of 1,472 The Greatest Minds of All Time 739.9k VOTES List of the Greatest Minds of All Time, throughout history. This list represents the most influential thinkers across variou...
#53 of 91 The Most Enlightened Leaders in World History 43.7k VOTES Enlightened leadership takes on many forms. Sometimes, especially in the ancient world, it was the codifying of laws and pre...
#7 of 20 The Greatest Characters Played by Morgan Freeman, Ranked 672 VOTES This list contains information on the best characters played by Morgan Freeman ranked from best to worst by user votes. Th...
#4 of 160 Celebrity Death Pool 2013 15.4k VOTES Every year we lose more and more famous celebrities. Whether it's from natural causes, suicide, drug abuse or just plain cra...
11 Infamous Outlaws Who Wound Up Working For The Man In The End 20.6k VIEWS Numerous outlaws throughout history came back around from their rabble-rousing and trouble-causing days to serve as lawmen, ...
Who Did These Eventually Famous Kids Grow Up To Be? 998.5k VIEWS When kids are young, they can be anything: astronauts, politicians, police officers, attorneys, the ice cream man (you know ...
Every Person Who Has Been Immortalized in a Google Doodle 57.2k VIEWS Who are the most influential people in history? Here's a good place to start. This is a list of every person who has ev...
#12 of 34 The Best New Yorker Covers 2.4k VOTES List of the most memorable New Yorker magazine covers, featuring the coolest photographs, sexiest celebrity shots, and most ...
Famous Men Who Married Much Younger Women 733k VIEWS List of Famous Men Who Married Much Younger Women, loosely ranked by fame and popularity. Many of Hollywood's leading men ha...
The 18 Most Admired People of the 20th Century 22.3k VIEWS Who do we most admire? Gallup found out with a poll in 1999. Here are the most admired people of the 20th Century, from Moth...
Celebrity Piston Fans 3.4k VIEWS Detroit sports teams boast scores of celebrity fans, and the Pistons are no exception. The courtside seats at The Palace of ...
20 Famous People Who Went to Law School 130.7k VIEWS This list of famous people who went to law school is loosely ranked by fame and popularity. Several famous actors, musicians...
34 Famous ENFJs 114.4k VIEWS Several famous actors, musicians and journalists are believed to be ENFJs (Extraverted Intuitive Feeling Judging). ENFJs are...
Guests on the Final Oprah Winfrey Shows 15k VIEWS Oprah's final days as the queen of daytime television are approaching and May 25 marks the last episode of the Oprah Winfrey...
Gallup Poll: Widely Admired People of the 20th Century 12.6k VIEWS Gallup every year polls US citizens asking which people they "most admire" – this list was compiled from the resul...

Nelson Mandela is also found on...