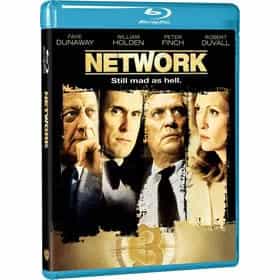 Network is a 1976 American satirical film written by Paddy Chayefsky and directed by Sidney Lumet, about a fictional television network, UBS, and its struggle with poor ratings. The film stars Faye Dunaway, William Holden, Peter Finch, and Robert Duvall and features Wesley Addy, Ned Beatty, and Beatrice Straight. The film won four Academy Awards, in the categories of Best Actor, Best Actress, Best Supporting Actress, and Best Original Screenplay. In 2000, the film was selected for preservation in the United States National Film Registry by the Library of Congress as being "culturally, historically, or aesthetically significant". In 2002, it was inducted into the Producers ... more on Wikipedia

Network is ranked on...

Network is also found on...