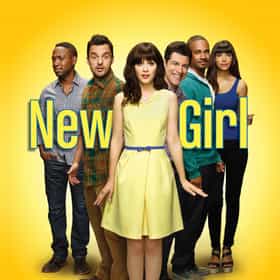 New Girl is an American sitcom television series that premiered on Fox on September 20, 2011. Developed by Elizabeth Meriwether under the working title Chicks & Dicks, the series revolves around offbeat teacher Jess after her moving into an LA loft with three men, Nick, Schmidt, and Winston; Jess' best friend Cece and old-turned-new loftmate Coach also appear regularly. The show combines comedy and drama elements as the characters, who are in their early thirties, deal with maturing relationships and career choices. The series' fourth season premiered on September 16, 2014. The series was renewed for a fifth season on March 31, 2015. Produced in Los Angeles as a single-camera ... more on Wikipedia

Freaks and Geeks
Schmidt's Best One-Liners From 'New Girl' 3.1k votes America's loveable douchebag, Schmidt has managed elevate his New Girl douchery to something of an art form. Over the course...
15 Winston and Ferguson Moments on New Girl That Capture Cat Lovers Perfectly 707 votes New Girl is one of the best shows on television, because it portrays relationships absolutely perfectly. All types of relati...
The Best Seasons of 'New Girl' 429 votes All the seasons of New Girl have been great, but which seasons really stand out? Jessica Day and her loftmates become more l...
The Most Important Episodes Of 'New Girl' 286 votes It’s difficult to pick the most important New Girl episodes. The beloved series aired for seven seasons and consists of 146 ...
The Best 'New Girl' Episodes To Watch During The Holidays 60 votes Spend time with Jess and the boys, and enjoy the best New Girl holiday-themed episodes. Whether you're looking for the one w...
How the Cast of New Girl Aged from the First to Last Season 4.5k views From raising a glass of pink wine to going head-to-head in another game of True American, viewers have laughed along while w...

New Girl is ranked on...