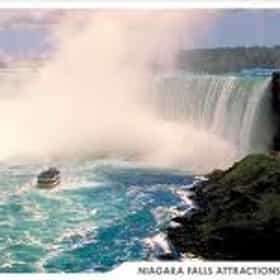 Niagara Falls is a city in Niagara County, New York, United States. As of the 2010 census, the city had a total population of 50,193, down from the 55,593 recorded in the 2000 census. It is adjacent to the Niagara River, across from the city of Niagara Falls, Ontario, and named after the famed Niagara Falls which they share. The city is within the Buffalo–Niagara Falls Metropolitan Statistical Area as well as the Western New York region. While the city was formerly occupied by Native Americans, Europeans who migrated to the Niagara Falls in the mid-17th century began to open businesses and develop infrastructure. Later in the 18th and 19th centuries, the city began to harness the power ... more on Wikipedia

Spooky Ghost Stories And Legends From Niagara Falls 398 votes It makes perfect sense that Niagara Falls, on both the Canadian and US sides, would be haunted. The area is rich in history ...

Niagara Falls is ranked on...