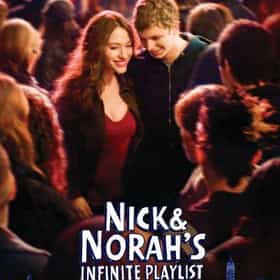 Nick & Norah's Infinite Playlist is a 2008 romantic comedy-drama film directed by Peter Sollett and starring Michael Cera and Kat Dennings. Written by Lorene Scafaria and based on the novel of the same name by Rachel Cohn and David Levithan, the story tells of teenager Nick and Norah, who meet when Norah asks Nick to pretend to be her boyfriend for five minutes. Over the course of the night, they try to find their favorite band's secret show and search for Norah's drunken best friend. The film came into development in 2003 when producer Kerry Kohansky Roberts found Cohn and Levithan's novel and decided to adapt it for film. Scafaria was hired to write the script in 2005, and ... more on Wikipedia