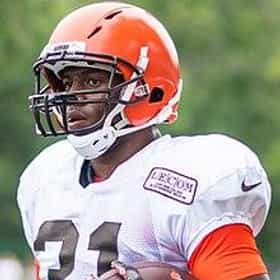 Nicholas Jamaal Chubb (born December 27, 1995) is an American football running back for the Cleveland Browns of the National Football League (NFL). He played college football at Georgia and was drafted by the Browns in the second round of the 2018 NFL Draft. Chubb attended Cedartown High School in Cedartown, Georgia, where he was a two-sport star for the Bulldogs; football and track teams. In football, he led the state of Georgia in rushing yards with 2,721 with 38 touchdowns as a junior. As a senior, he had 2,690 yards and 41 touchdowns. He finished his high school career with 6,983 rushing yards and 102 rushing touchdowns. ... more on Wikipedia

Nick Chubb is ranked on...