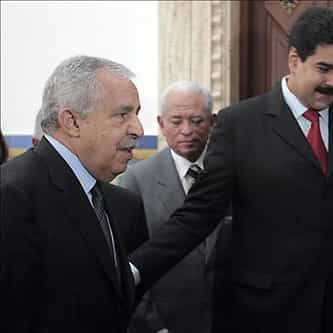 Nicolás Maduro Moros (; Spanish pronunciation: [nikoˈlas maˈðuɾo ˈmoɾos] (listen); born 23 November 1962) is a Venezuelan politician serving as president of Venezuela since 2013, with his presidency being disputed with Juan Guaidó since January 2019. Beginning his working life as a bus driver, Maduro rose to become a trade union leader before being elected to the National Assembly in 2000. He was appointed to a number of positions under President Hugo Chávez and ... more on Wikipedia

Nicolás Maduro IS LISTED ON