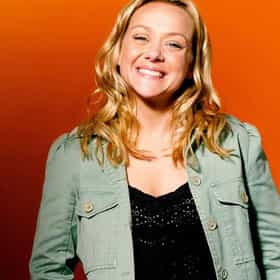 Nicole Julianne Sullivan (born April 21, 1970) is an American actress, voice artist and comedian. Sullivan is best known for her six seasons (1995–2001) on the sketch comedy series MADtv. She also played the role of Holly Shumpert for five seasons (2001–2005, 2007) on the CBS sitcom The King of Queens. She has played a recurring character, Jill Tracy, on Scrubs and voiced the heroic Mira Nova in Disney/Pixar's Buzz Lightyear of Star Command and the villainous Shego in Disney's Kim Possible. She had recurring voice roles on Family Guy and voiced "Franny Robinson" in Disney's Meet the Robinsons. From 2008 to 2009, Sullivan starred in and was the lead of her own Lifetime ... more on Wikipedia

Nicole Sullivan is ranked on...

#752 of 1,582 The Most Beautiful Women in the World 5.6M VOTES Naming the most beautiful women in the world is a difficult task because of how subjective it is. Beauty is a mixture of phy...
#101 of 294 The Funniest Female Comedians of All Time 253.5k VOTES The funniest female comedians star on our favorite sitcoms, perform standup at the top comedy clubs and best of all, make us...
#8 of 35 The Most Successful Mad TV Cast Members 4.4k VOTES List of the most successful Mad TV cast members, as ranked by fans and critics. From 1995-2009, the sketch comedy show Mad T...
#11 of 20 The Best Female Stand Up Comedians of the 2000s 688 VOTES Some of the best 2000s stand up comedians might include men like Louis C.K. or Dane Cook, it is also women like Tig Notaro...
Famous People Whose Last Name Is Sullivan 4.2k VIEWS Being a fairly common name, it's no surprise there are a lot of famous people with the last name Sullivan. Do you recognize ...
#11 of 70 Who Is The Most Famous Nicole In The World? 615 VOTES List of famous people named Nicole, along with photos. How many celebrities named Nikki can you think of? The famous Nicoles...

Nicole Sullivan is also found on...