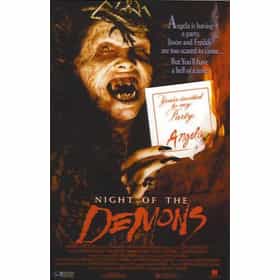 Night of the Demons

Night of the Demons is a 1988 American supernatural horror film written and produced by Joe Augustyn and directed by Kevin S. Tenney. The film tells the story of ten high school seniors having a Halloween party in an isolated mortuary. Their party turns into a nightmare when after conducting a séance as a party game, they unlock the demon that remains locked in the crematorium. Filming of Night of the Demons took place in South Central Los Angeles, California, USA, and lasted for two months. Anchor Bay Entertainment released it to DVD in 2004; Scream Factory released a Blu-ray/DVD combo pack collector's edition on February 4, 2014. The film was followed by the sequels Night of ... more on Wikipedia

Night of the Demons is ranked on...

#360 of 769 The Best Horror Movies of All Time 1M VOTES Horror movies, ranked by adrenaline junkies worldwide. Anyone can vote on this CrowdRanked list, and can even add your own f...
#139 of 347 The Best Movies of 1988 12.7k VOTES A list of the best movies of 1988, from light dramas like Bull Durham to action movies like Die Hard.The '80s were a decade ...
#9 of 23 Underrated Halloween Movies You Should Watch This Year 85.2k VOTES Isn’t Halloween the best? Not only do you get to dress up and eat candy, but you don't look weird for watching spooky movies...
#32 of 65 The Best Demonic Possession Movies 32.6k VOTES There’s nothing more horrifying than watching a movie about a person who’s possessed by a demon. What is it about the though...
#78 of 128 The Best Horror Movie Franchises 109.3k VOTES What are the best horror movie franchises? Certainly, some of the biggest factors in determining a great horror movie series...
#57 of 161 The Best '80s Horror Movies 104.4k VOTES This list of the best 80s horror movies is a lengthy one, with good reason. The 1980s were a phenomenal decade for horror fi...
#14 of 55 The Best Horror Movies That Take Place On Halloween 2k VOTES If you are looking for the ultimate list of Halloween horror movies, you've come to the right place. This lis...
#256 of 499 The Scariest Movies Ever Made 545.4k VOTES These are the all-time scariest movies ever made. Many of these movies have become part of the pop culture lexicon due to th...
#66 of 209 The Best Teen Movies Rated R 7.1k VOTES List of R-Rated teen movies, ranked from best to worst with movie trailers when available. Find these and more great movies ...
The Best Horror Movies To Watch On Every Holiday 4.3k VIEWS Everyone loves watching horror movies on Halloween, right? But sometimes, especially when lounging around during the ho...
#42 of 178 The Best R-Rated Horror Comedies 7.5k VOTES List of R-Rated horror comedies, ranked from best to worst with movie trailers when available. This list takes the best R-Ra...

Night of the Demons is also found on...