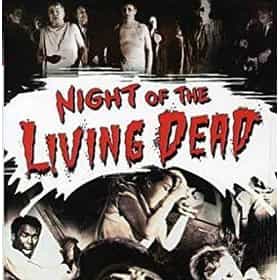 Night of the Living Dead is a 1968 American independent zombie horror film directed by George A. Romero, starring Duane Jones, Judith O'Dea and Karl Hardman. It premiered on October 1, 1968, and was completed on a US$114,000 budget. The film became a financial success, grossing $12 million domestically and $18 million internationally. It has been a cult classic ever since. Night of the Living Dead was heavily criticized at its release for its explicit gore, but eventually garnered critical acclaim and has been selected by the Library of Congress for preservation in the National Film Registry as a film deemed "culturally, historically or aesthetically significant." The story ... more on Wikipedia

Night of the Living Dead is ranked on...

#14 of 799 The Best Horror Movies Of All Time 1M VOTES Horror movies, ranked by adrenaline junkies worldwide. Anyone can vote on this CrowdRanked list, and can even add your own f...
#80 of 568 The Greatest Disaster Movies of All Time 97.4k VOTES These are the most entertaining, the most fun, the greatest disaster movies ever made, ranked by movie experts and film fans...
#30 of 59 The Best Movies Where the Bad Guy Wins 14k VOTES What is it that makes a psychological thriller even better than having an ending where the villain wins? Maybe it’s because ...
#87 of 98 The Best Movies of 1990 17.1k VOTES A list of the best movies of 1990, from light dramas like Edward Scissorhands to action movies like Die Hard 2. The '90s wer...
#5 of 151 The Best Zombie Movies of All Time 172.9k VOTES List of the best zombie movies ever, including popular blockbusters like Zombieland, 28 Days Later, and Dawn of the Dea...
#24 of 137 The Goriest Movies Ever Made 271.4k VOTES Are you a fan of gory movies? If so, you’ve come to the perfect place to find a new favorite gory movie. Go ahead and browse...
#14 of 14 The Worst Horror Movie Parents 338 VOTES Horror movies are full of awful parents. Since the genre heavily features protagonists who are teens or young adults, h...
#11 of 15 These Utterly Nasty Horror Films Are Sure To Make You Feel Queasy 2.9k VOTES Do you feel the Halloween spirit year-round? Do you wish it was socially acceptable to wear fake blood to the office? Well, ...
#6 of 18 The Most Unsettling Opening Scenes In Horror Movie History 2k VOTES More so than any other genre, horror films have to grab their audience within the first few minutes to avoid anyone bec...
#50 of 118 The Most Nausea-Inducing Great Films 40k VOTES The most nausea-inducing great films manage to make moviegoers squirm with discomfort, but leave the theater feeling like th...
#5 of 15 Horror Movie References In 'The Simpsons' 'Treehouse Of Horror' Specials 958 VOTES The Simpsons became the longest-running primetime scripted television series in April 2018 when it aired episode 6...
#8 of 25 Shows & Movies to Watch If You Love "The Walking Dead" 3.4k VOTES The Walking Dead is a phenomenon, and it's not hard to see why. Between the bloody action, complex characters, and apoc...
#13 of 35 Rainy Day Horror Movies You Can Watch Again And Again 4.3k VOTES Halloween is a time for parties, pumpkins, and scares galore. While there are fun rituals that accompany the holiday, includ...
#55 of 101 The Best Opening Movie Scenes of All Time 53.9k VOTES The best opening movie scenes of all time are those first sequences of iconic films that set the tone for the magnificence t...
#4 of 69 The Best '60s Horror Movies 5.7k VOTES LSD, Woodstock, JFK, MLK, The Beatles, and the moon landing - the 1960s were quite a decade, and saw the release of some of ...
#20 of 108 The Best Apocalyptic And Post-Apocalyptic Movies 29.3k VOTES A list of all the best apocalyptic and post-apocalyptic fiction movies ever made, many of which are streaming on Netflix and...
Real Locations Of Famous Horror Movies You Can Visit Today 66.3k VIEWS Some horror film fans like to immerse themselves as much as possible in their favorite thrillers by collecting&nbs...
#8 of 133 The Best Movies of 1968 4.6k VOTES List of the best movies of 1968, with movie trailers when available. The year 1968 was a historic year in film, and includ...
What Your Favorite Horror Movie Says About You 37.6k VIEWS Horror fans are a rare breed of filmgoer. Once they find a film to love, it becomes their baby, no matter how the film’s con...
#13 of 207 The Best Classic Horror Movies 83.8k VOTES If you’re a true horror film enthusiast then you’ll recognize these famous directors and the movies that earned them worldwi...
#1 of 41 The Best Horror Movies On Amazon Prime 24.4k VOTES This list of the best horror movies on Amazon Prime is updated regularly for your perusal. All the best horror films on Amaz...
#22 of 77 The Best Horror Movies for Date Night 19.5k VOTES Are you hoping for the perfect horror movie pick for a night of cuddling? Horror movies can sometimes make the best choice f...
#2 of 27 The Best 60s Monster Movies 313 VOTES The ‘60s may have been about free love, burning bras and dodging the draft, but for a whole lot of people it was about sitti...
Which Scary Movie Will Freak You Out The Most According To Your Zodiac Sign? 4.9k VIEWS Everyone loves to be scared - some people more than others. When you’re looking for a great horror movie to freak you out, t...
#1 of 50 The Best Horror Movies of 1968 233 VOTES List of the best 1968 horror movies, ranked by how many upvotes they've received by other fans of the genre. All types of sc...
#1 of 30 The Best Monster Movies On Shudder 304 VOTES For just a few bucks a month, horror fans can get access to Shudder, one of the premiere streaming services on the internet....

Night of the Living Dead is also found on...