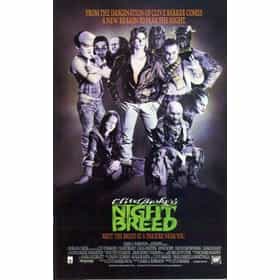 Nightbreed is a 1990 American dark fantasy film written and directed by Clive Barker, based on his 1988 novella Cabal. The film features Craig Sheffer as Aaron Boone, an unstable mental patient led to believe by his doctor that he is a serial killer. Tracked down by the police, his doctor, and his girlfriend Lori, Boone eventually finds refuge in an abandoned cemetery called Midian among a "tribe" of monsters and outcasts known as the "Nightbreed" that hide from humanity. Nightbreed was a commercial and critical failure at the time of its release. In several interviews, Barker protested that the film company tried to sell it as a standard slasher film, and that the ... more on Wikipedia

It Was Overlooked In The '90s, But 'Nightbreed' Is Clive Barker's Masterpiece 42k views Clive Barker's Nightbreed movie - which was only his second feature film as director, after Hellraiser - didn't exactly rake...

Nightbreed is ranked on...

#283 of 769 People who voted for Nightbreed... are 4x more likely to vote for Alien Franchise on this list are 7x more likely to vote for Hellraiser Franchise on this list The Best Horror Movies of All Time 1M VOTES Horror movies, ranked by adrenaline junkies worldwide. Anyone can vote on this CrowdRanked list, and can even add your own f...
#40 of 43 These Hand-Painted Movie Posters From Ghana Are Just Nuts 544 VOTES The collection of crazy hand-painted movie posters from Ghana on this list provides a microcosm of how local cultures a...
#2 of 15 Amazing Horror Films From The '90s Most People Overlooked 3.1k VOTES The '90s was almost 20 years ago, and while most of us remember that shocking twist in The Sixth Sense and probably sti...
#79 of 142 The Best Horror Movies of the 1990s 70.6k VOTES What are the best '90s horror movies ever made? While some could argue that the '80s horror movies were far superior, that's...
#158 of 233 The Best R-Rated Horror Movies 8.4k VOTES List of R-Rated horror movies, ranked from best to worst with movie trailers when available. This list takes the best R-Rate...
#4 of 8 The Best Movies Based On Clive Barker Books 79 VOTES There are a total of eight movies based on Clive Barker books and short stories. The horror virtuoso not only writes, b...
#89 of 100 Movies Turning 30 In 2020 430 VOTES Let's hop in a hypothetical time machine and revisit the movies that came out in 1990. Three full decades have passed, and s...
#8 of 24 The Best 90s Monster Movies 1.3k VOTES For all the horror and action nerds, here is a list of the best ‘90s monster movies, ranked by other movie fans on Ranker. T...
#9 of 25 Movies & TV Shows to Watch If You Love Harry Potter 1.1k VOTES When J.K. Rowling first released Harry Potter and the Philosopher's Stone, nobody could have predicted the influen...
#9 of 23 The Best '90s Zombie Movies & Undead Horror Films 1.1k VOTES This best 1990s zombie movies is a fun one to rank. With so many cult classics, this list of zombie movies of the 90s will b...
#9 of 30 The Best Monster Movies On Shudder 304 VOTES For just a few bucks a month, horror fans can get access to Shudder, one of the premiere streaming services on the internet....
#19 of 35 The Best John Agar Movies 151 VOTES List of the best John Agar movies, ranked best to worst with movie trailers when available. John Agar's highest grossing mov...

Nightbreed is also found on...