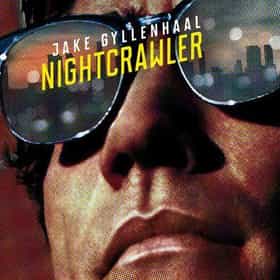 Nightcrawler is a 2014 American neo-noir thriller film written and directed by Dan Gilroy in his directorial debut. The film stars Jake Gyllenhaal who starts shooting footage in Los Angeles and selling it to news channels. It features Rene Russo, Riz Ahmed, and Bill Paxton. The film had its world premiere at the Special Presentations section of the 2014 Toronto International Film Festival. It was released theatrically by Open Road Films on October 31, 2014. It received critical acclaim and was nominated for the Academy Award for Best Original Screenplay at 87th Academy Awards. ... more on Wikipedia

Nightcrawler is ranked on...

#158 of 250 The Best Psychological Thrillers of All Time 481.8k VOTES A list of the best psychological thrillers of all time, ranked by fans who may or may not be trying to mess with your head! ...
#5 of 20 New Cult Classics From The 2010s, Ranked 706 VOTES The world of cult films has accelerated in the 21st century thanks to the slowly increasing accessibility of the f...
#15 of 108 The Greatest Directorial Debuts Of All Time 5.8k VOTES Believe it or not, some of the greatest films of all time were also some of the greatest directorial debuts to date. It...
#15 of 28 Great Movies About People Going Through Life Solo 673 VOTES Some people are loners by choice, while others are forced into a life of solitude by elements beyond their control. The top ...
#2 of 32 The Best Drama Movies of 2014 691 VOTES Let's get dramatic... There were a lot of great drama movies released in 2014, but which were the greatest? This list of the...
#14 of 24 Great Movies Where The Hero Doesn't Change Or Grow At All 540 VOTES Capitalism loves to impose rules on product, because if you can figure out why something sells, you can reproduce its s...
#12 of 51 The Best Directorial Debuts Since 2010, Ranked 436 VOTES While it may be surprising, some of the best films released since 2010 were directorial debuts. Sure, every famous director ...
#1 of 52 The Best Movies No One Saw in 2014 9.5k VOTES Let's face it, nowadays there are so many movies in theaters that it's almost impossible to see them all. Add to that the fi...
#82 of 238 The Greatest Movies Of The 2010s, Ranked 40.6k VOTES You have a very important task ahead of you - voting for the best movies of the 2010s. While that may sound easy on the surf...
#36 of 87 The Best Los Angeles Movies 2.8k VOTES Iconic red carpets, a sidewalk dotted with stars in honor of the world’s most famous celebrities, Hollywood, million-dollar ...
#10 of 46 The Best Indie Thriller Movies, Ranked 1.5k VOTES This list contains information on the best indie thriller movies, ranked from best to worst by user votes. The best indie th...
#25 of 64 The Best Bill Paxton Movies 6.3k VOTES List of the best Bill Paxton movies, ranked best to worst with movie trailers when available. Bill Paxton's highest grossi...