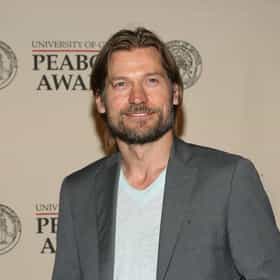 Nikolaj Coster-Waldau (Danish pronunciation: [nekolaɪ̯ kʰɒstɐ ˈvæltaʊ̯]; born 27 July 1970) is a Danish actor. He graduated from the Danish National School of Performing Arts in Copenhagen in 1993. Coster-Waldau's breakthrough performance in Denmark was his role in the film Nightwatch (1994). Since then he has appeared in numerous films in his native Scandinavia and Europe in general, including Headhunters (2011) and A Thousand Times Good Night (2013). In the U.S, his debut film role was in the war film Black Hawk Down (2001), playing Medal of Honor recipient Gary Gordon. He then played Detective John Amsterdam in the short-lived Fox television series New Amsterdam (2008), as ... more on Wikipedia

Nikolaj Coster-Waldau is ranked on...

#19 of 194 The Hottest Men Over 40 1.1M VOTES The hottest men in Hollywood? Turns out, the older they get, the more we like them! Like fine wines, tweens, and your favori...
#383 of 389 The Most Overrated Actors Of All Time 1.1M VOTES This list of the most overrated actors of all time, has been ranked by critics and fans from all over the world. Actors are ...
#192 of 431 The Hottest Male Celebrities 3.4M VOTES You love your boyfriend (husband? Lucky you!), but then there are these hot celebrity men. You see them and then you maybe f...
#154 of 243 The Hottest Men Of 2019, Ranked 2.6M VOTES This list rounds up the most handsome men of 2019. Some would say the most handsome man in the world was Brat Pitt,&nbs...
#1 of 33 The Hottest Guys on Game of Thrones 63.8k VOTES Game Of Thrones,  a fantasy show on HBO based on a series of novels by George R.R. Martin, also stars some of the ...
#15 of 39 The Top Casting Choices for the Next James Bond Actor 231.6k VOTES Who is going to be the new James Bond actor now that Daniel Craig doesn't want to be 007 in the next James Bond outing? Sinc...
#26 of 89 Celebrities Who Should Be A-Listers 120.2k VOTES If pop culture has room enough for multiple A-list Jennifers and Chrises, it has enough time to make some space for cer...
#68 of 128 Celebrities You'd Let Babysit Your Kid 66.9k VOTES Parents need to be extra careful when choosing a babysitter for your children, and picking a celebrity babysitter invol...
#71 of 90 Who Was America's Boyfriend in 2018? 64.9k VOTES There is no shortage of well-liked male celebrities in the world, so which lucky man will be America's boyfriend in 2018? Fr...
#8 of 15 Who Would Star In 'The Princess Bride' If It Were Made Today? 3.9k VOTES Decades after its release, The Princess Bride is still considered to be one of the greatest romantic fantasy films of all ti...
#22 of 51 People who voted for Nikolaj Coster-Waldau... People on the West Coast are 3x more likely to vote for this The Most Handsome Actors of 2012 15k VOTES The most handsome actors of 2012 are those hot celebrities who provided ample eye candy during the year. These television an...
#19 of 30 Who Should Play The Next Green Lantern? 12.8k VOTES The first Green Lantern has been around since 1940. Outside of comics, we saw him in cartoons and video games, but it wasn't...
#37 of 45 People who voted for Nikolaj Coster-Waldau... People in the Midwest are 2x more likely to vote for this The Male Celebrities With The Best Abs 245.8k VOTES Shirtless men are one of the biggest perks of the summer, and this list of the best celebrity abs is a showcase of the most ...
#6 of 80 Who Is America's Boyfriend in 2016? 38.6k VOTES What does America's boyfriend even mean? You know, he's the sweet, good-looking leading man (or hot new male celeb taking Ho...
#2 of 12 Game of Thrones Actors Who Have Been in Romcoms 443 VOTES Ah, it’s time to leave the “t*ts and dragons” behind and enjoy a little romantic comedy brought to you by the heroes and vil...
#14 of 18 Celebs You Didn't Know Aren't American 2.6k VOTES With the world growing smaller every day, it's no wonder that many of our favorite stars come from other countries. It used ...
#63 of 153 The Hottest Men Of 2018, Ranked 339.9k VOTES UPDATED: Check out the hottest celebrity men of 2019! Here are the most handsome men who won our hearts in 2018. Feat...
#18 of 21 The Oddest Celebrity Duos of 2014 1.6k VOTES We all know Hollywood is a weird place, so it shouldn't be much of a surprise that in a land where image is everything, some...
#3 of 52 The Best Game of Thrones Actors 22.7k VOTES Perhaps it should come as no surprise that there are a slew of award-winning actors in the Game of Thrones cast. T...
#4 of 24 How the Cast of Game of Thrones Aged from the First to Last Season 20.6k VOTES From fighting white walkers to angling for a seat on the Iron Throne, viewers have been on the edge of their seats while wat...
#42 of 60 The Best Episodes of WIRED's Autocomplete Interviews 357 VOTES There's nothing like procrastinating on YouTube by watching your favorite celebrities answer questions that you may or may n...
Times You've Seen the GoT Actors Before 3M VIEWS We imagine every character in George R.R. Martin's universe in a certain way. Likewise, as more and more characters are real...
How to Pronounce Tricky Celebrity Names 16.2k VIEWS Not every celebrity name is as straight-forward as "Tom Hanks" and you won't find him anywhere near this list, whi...
Cool Pics Of The 'Game Of Thrones' Cast When They Were Young 114.4k VIEWS Many of the excellent actors who make up the Game of Thrones cast have been performing and honing their craft for a very lon...
A Look Back on Game of Thrones Actors in '90s Movies 103.8k VIEWS Want to see Game of Thrones characters when they were young? Many of them starred in '90s films, back when they weren’t alwa...
35 Celebs Who Are Scandinavian 22.9k VIEWS Maybe there's something in the air in Scandinavia, or perhaps it's the geography that encourages artists. Whatever the cause...

Nikolaj Coster-Waldau is also found on...