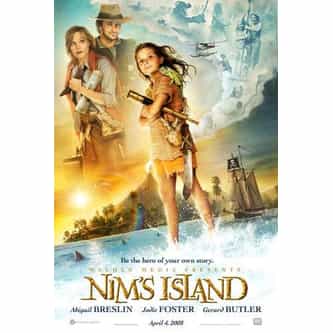 Nim's Island is a 2008 American-Australian adventure-fantasy film directed by Jennifer Flackett and Mark Levin and starring Abigail Breslin, Jodie Foster, and Gerard Butler. The story is based on the children's story of the same name by Wendy Orr. A young girl, Nim, seeks help from the author of her favorite adventure series when her scientist father goes missing. Nim, though, lives on an island in the South Pacific. The author, Alexandra Rover, is agoraphobic and lives in San Francisco. ... more on Wikipedia

Nim's Island IS LISTED ON