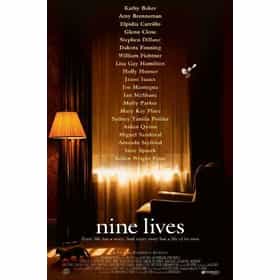 Nine Lives is a 2005 American drama film written and directed by Rodrigo García. The screenplay, an example of hyperlink cinema, relates nine short, loosely intertwined tales with nine different women at their cores. Similar to García's previous work, Things You Can Tell Just by Looking at Her, it is a series of overlapping vignettes, each one running about the same length and told in a single, unbroken take, featuring an ensemble cast. ... more on Wikipedia

Nine Lives is ranked on...

Nine Lives is also found on...