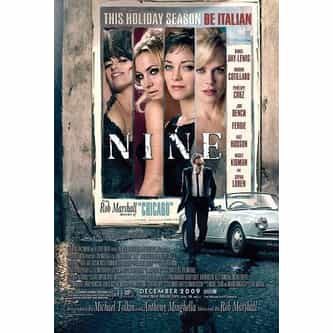 Nine is a 2009 musical drama metafilm directed and produced by Rob Marshall. The screenplay, written by Michael Tolkin and Anthony Minghella, is based on Arthur Kopit's book for the 1982 musical Nine, which was suggested by Federico Fellini's semi-autobiographical film 8½. Maury Yeston composed the music and wrote the lyrics for the songs. The film premiered in London, opened the 6th annual Dubai International Film Festival on December 9, 2009 and was released in the United States ... more on Wikipedia

Nine IS LISTED ON