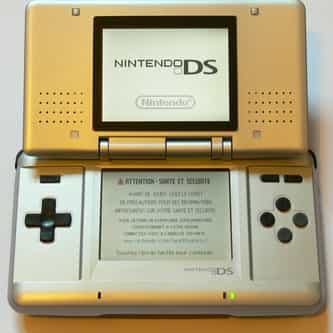 The Nintendo DS is a dual-screen handheld game console developed and released by Nintendo. The device went on sale in North America on November 21, 2004. The DS, short for "Developers' System" or "Dual Screen", introduced distinctive new features to handheld gaming: two LCD screens working in tandem, a built-in microphone, and support for wireless connectivity. Both screens are encompassed within a clamshell design similar to the Game Boy Advance SP. The Nintendo DS ... more on Wikipedia

251 votes The Most Underrated Nintendo DS Games Of All Time

Nintendo DS IS LISTED ON

#15 of 47
73.7k VOTES The Best Game Systems of All Time People who voted for Nintendo DS on this list also upvote Super Mario 64 on The 100+ Best Video Games of All Time, Ranked by Fans