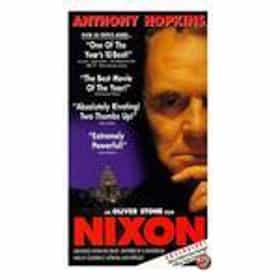 Nixon is a 1995 American biographical film directed by Oliver Stone for Cinergi Pictures that tells the story of the political and personal life of United States President Richard Nixon, played by Anthony Hopkins. The film portrays Nixon as a complex and, in many respects, admirable, though deeply flawed, person. Nixon begins with a disclaimer that the film is "an attempt to understand the truth [...] based on numerous public sources and on an incomplete historical record." ... more on Wikipedia

Nixon is ranked on...

Nixon is also found on...