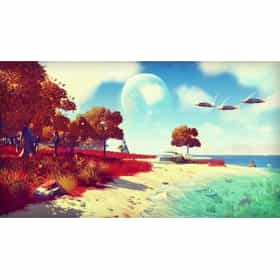 No Man's Sky is an action-adventure survival video game developed and published by the indie studio Hello Games. It was released worldwide in August 2016 for PlayStation 4 and Microsoft Windows, while an Xbox One version is scheduled for release in mid-2018. The game is built around four pillars: exploration, survival, combat, and trading. Players are free to perform within the entirety of a procedurally generated deterministic open universe, which includes over 18 quintillion planets. Through the game's procedural generation system, planets have their own ecosystems with unique forms of flora and fauna, and various sentient alien species may engage the player in combat or trade within ... more on Wikipedia