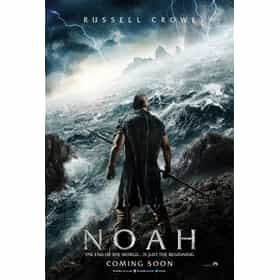 Noah is a 2014 American biblically inspired epic directed by Darren Aronofsky, written by Aronofsky and Ari Handel, and inspired by the story of Noah's Ark from the Book of Genesis. The film stars Russell Crowe as Noah, along with Jennifer Connelly, Ray Winstone, Emma Watson, Logan Lerman, and Anthony Hopkins. The film was released in North American theaters on March 28, 2014, in 2D and IMAX, while several countries released a version of the film converted to 3D and IMAX 3D. Noah received generally positive reviews from critics, but generated controversy with audiences, and grossed over $362 million worldwide. ... more on Wikipedia

Noah is ranked on...

Noah is also found on...