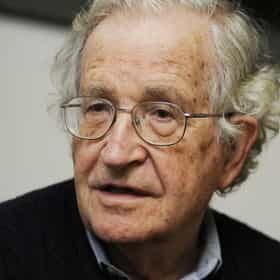 Avram Noam Chomsky (born December 7, 1928) is an American linguist, philosopher, cognitive scientist, historian, social critic, and political activist. Sometimes called "the father of modern linguistics", Chomsky is also a major figure in analytic philosophy and one of the founders of the field of cognitive science. He holds a joint appointment as Institute Professor Emeritus at the Massachusetts Institute of Technology (MIT) and laureate professor at the University of Arizona, and is the author of more than 100 books on topics such as linguistics, war, politics, and mass media. Ideologically, he aligns with anarcho-syndicalism and libertarian socialism. Born to working-class ... more on Wikipedia

Noam Chomsky is ranked on...

#294 of 1,176 The Best Writers of All Time 312.6k VOTES The pen is truly mightier than the sword, and if you’re a book enthusiast you know that to be true. Some of history’s most i...
#73 of 152 The Most Ridiculous Political Pundits 166.6k VOTES This is a bipartisan list of the most over-the-top, spittle-stained, fist-thumping, hyperbolic political pundits of all ti...
#315 of 1,471 The Greatest Minds of All Time 745.5k VOTES List of the Greatest Minds of All Time, throughout history. This list represents the most influential thinkers across variou...
#62 of 113 People who voted for Noam Chomsky... People outside of the US are 2x more likely to vote for this The Most Influential Contemporary Americans 142.1k VOTES A list of the Americans who have had the most central influence on, or importance to, the modern era. This would include Ame...
Famous INFJs 991.7k VIEWS Many of the most prolific actors, musicians, politicians, and even world leaders are INFJ (Introverted Intuitive Feeling Jud...
#4 of 38 The Most Influential Contemporary Minds 868 VOTES With major threats to world stability like climate change, nuclear war, and mass extinction mounting, the world needs public...
Celebrities Who Live in Boston 44 VIEWS This list includes information about celebrities who live in Boston, loosely ranked by popularity. Celebrities that live in ...

Noam Chomsky is also found on...