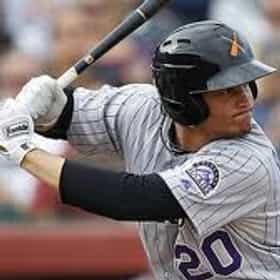 Nolan James Arenado (born April 16, 1991) is an American professional baseball third baseman for the Colorado Rockies of Major League Baseball (MLB). He made his MLB debut with the Rockies in 2013. Arenado has been considered among the top third basemen in the league both for his contributions as a hitter for power and average, as well as his defensive range and arm strength. He is the only infielder to win the Rawlings Gold Glove Award in each of his first seven MLB seasons. A native of Newport Beach, California, Arenado attended El Toro High School in nearby Lake Forest before becoming the Rockies' second-round selection in the 2009 MLB draft. A five-time MLB All-Star, his defensive ... more on Wikipedia

Nolan Arenado is ranked on...

Nolan Arenado is also found on...