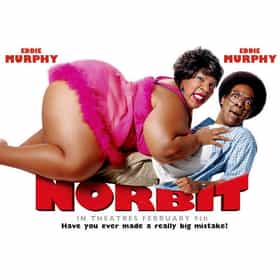 Norbit is a 2007 American romantic comedy film directed by Brian Robbins, and written and produced by Eddie Murphy, who also starred in the film. The film co-stars Thandie Newton, Terry Crews, Eddie Griffin, Katt Williams, Marlon Wayans and Cuba Gooding Jr. It was released by DreamWorks and Paramount Pictures on February 9, 2007. Norbit features a collaboration between Terry Crews and Marlon Wayans, reuniting them for the first time since 2004's White Chicks. The film was nominated for an Academy Award in make-up, and also multiple wins at the 2007 Golden Raspberry Awards. It was negatively received by critics, but the film was a commercial success. ... more on Wikipedia

Norbit is ranked on...

Norbit is also found on...