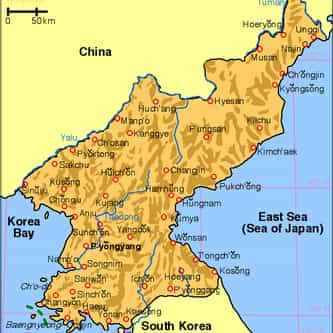 North Korea, officially the Democratic People's Republic of Korea, is a country in East Asia, in the northern part of the Korean Peninsula. The capital and largest city is Pyongyang. North Korea shares a land border with China to the north and north-west, along the Amnok and Tumen rivers. A small section of the Tumen River also forms North Korea's border with Russia to the northeast. The Korean Demilitarized Zone marks the boundary between North Korea and South Korea. The legitimacy of ... more on Wikipedia

22.2k readers Here's What Daily Life Is Really Like For Citizens Of North Korea

39.7k readers Here's What It's Really Like To Be A U.S. Prisoner In North Korea

249.2k readers The Weirdest Laws In North Korea You Had No Idea People Have To Follow

14.3k readers What Do North Korean Schoolchildren Learn About The United States?

North Korea IS LISTED ON