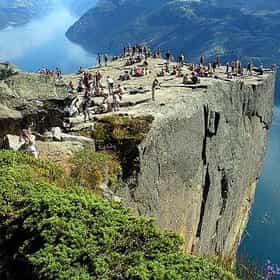 Norway, officially the Kingdom of Norway, is a sovereign and unitary monarchy whose territory comprises the western portion of the Scandinavian Peninsula plus Jan Mayen and the Arctic archipelago of Svalbard. The Antarctic Peter I Island and the sub-Antarctic Bouvet Island are dependent territories and thus not considered part of the Kingdom. Norway also lays claim to a section of Antarctica known as Queen Maud Land. Until 1814, the Kingdom included the Faroe Islands, Greenland, and Iceland. Norway has a total area of 385,252 square kilometres and a population of 5,109,059 people. The country shares a long eastern border with Sweden. Norway is bordered by Finland and Russia to the ... more on Wikipedia

Norway is ranked on...

Norway is also found on...