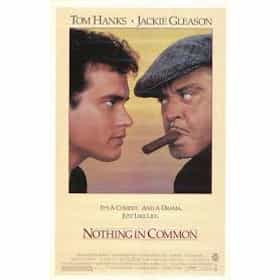 Nothing in Common is a 1986 comedy-drama film, directed by Garry Marshall. It stars Tom Hanks and Jackie Gleason in what would prove to be Gleason's final film role - he was suffering from colon cancer, liver cancer, and thrombosed hemorrhoids during production. The film, released in 1986, was not a great financial success, but it became more popular as Hanks's fame grew. It is considered by some to be a pivotal role in Hanks's career because it marked his transition from less developed comedic roles to leads in more serious stories, while many critics also praised Gleason's performance. The original music score was composed by Patrick Leonard. The title song performed by Thompson ... more on Wikipedia

Nothing in Common is ranked on...

Nothing in Common is also found on...