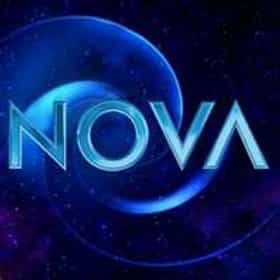 Nova is a United States popular science television series produced by WGBH Boston. It is broadcast on Public Broadcasting Service in the U.S., and in more than 100 other countries. The series has won many major television awards. Nova often includes interviews with scientists doing research in the subject areas covered and occasionally includes footage of a particular discovery. Some episodes have focused on the history of science. Examples of topics covered include the following: Colditz Castle, Drake equation, elementary particles, 1980 eruption of Mount St. Helens, Fermat's Last Theorem, global warming, moissanite, Project Jennifer, storm chasing, Unterseeboot 869, Vinland, and the ... more on Wikipedia

Nova is ranked on...

#224 of 383 People who voted for Nova... People over 50 are 2x more likely to vote for this also upvote Star Wars Franchise on The Best Movies of All Time The Best TV Shows of The Last 20 Years 1.5M VOTES This best TV show list represents the combined opinions of thousands of TV fans. Anyone can vote on this list of the best TV...
#57 of 397 People who voted for Nova... People in the Central US are 2x more likely to vote for this TV Shows That Only Smart People Appreciate 1.3M VOTES Since about the early 2000s, TV audiences have been blessed with what many experts call The Golden Age of Television. In oth...
#35 of 45 What to Watch If You Love 'The Daily Show' 64 VOTES Wondering what to watch after The Daily Show? If the political hilarity of the series has you hungry for more smart and sill...
#4 of 31 The Best Current Affairs TV Shows 587 VOTES The very best current affairs shows on television, ranked from best to worst. This list of the greatest current affairs sh...
#21 of 36 The Best Nature & Animal Shows On Netflix 1.7k VOTES Here are the best nature shows streaming now on Netflix. Whether you're looking for shows with animals, exotic locations, or...

Nova is also found on...