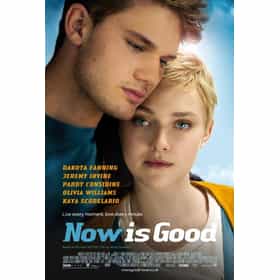 Now Is Good is a 2012 British teen drama film directed by Ol Parker. Based on the 2007 novel Before I Die by Jenny Downham, it was adapted by Parker who had recently written the screenplay for The Best Exotic Marigold Hotel. The film, which stars Dakota Fanning, Jeremy Irvine and Paddy Considine, centres on Tessa, a girl who is dying of leukaemia and tries to enjoy her remaining life as much as she possibly can. The first trailer for the film was released on 5 March 2012. ... more on Wikipedia

Now Is Good is ranked on...