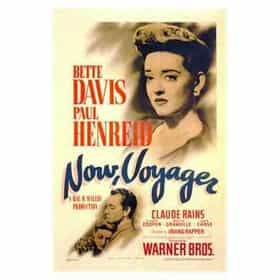 Now, Voyager is a 1942 American drama film starring Bette Davis, Paul Henreid, and Claude Rains, and directed by Irving Rapper. The screenplay by Casey Robinson is based on the 1941 novel of the same name by Olive Higgins Prouty. Prouty borrowed her title from the Walt Whitman poem "The Untold Want", which reads in its entirety, The untold want by life and land ne'er granted, Now, voyager, sail thou forth, to seek and find. In 2007, Now, Voyager was selected for preservation in the United States National Film Registry by the Library of Congress as being "culturally, historically, or aesthetically significant." The film ranks #23 on AFI's 100 Years... 100 Passions, a ... more on Wikipedia

Now, Voyager is ranked on...

Now, Voyager is also found on...

Every Oscar Winning Film Ever Romance Movies and Films