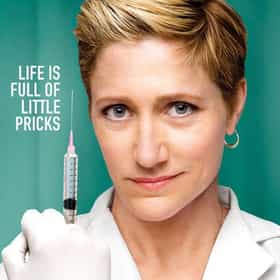 Nurse Jackie is an American medical dark satirical comedy-drama series. It premiered on Showtime on June 8, 2009. The show's seventh and final season will premiere April 12, 2015. The show stars Edie Falco as the title character Jackie Peyton, an emergency department nurse at All Saints' Hospital in New York City. For Jackie, "every day is a high wire act of juggling patients, doctors, fellow nurses, and her own indiscretions." ... more on Wikipedia

Nurse Jackie is ranked on...

#260 of 802 People who voted for Nurse Jackie... also upvote Michael C. Hall on The Best Actors Working Today also upvote The Fault in Our Stars on The Best Recent Young Adult Books The Best TV Shows To Binge Watch 1.3M VOTES Bored? Not anymore! These are the best TV shows for binge-watching. The greatest television shows in the world are ranked he...
#219 of 391 TV Shows That Only Smart People Appreciate 1.3M VOTES Since about the early 2000s, TV audiences have been blessed with what many experts call The Golden Age of Television. In oth...
#379 of 482 The Funniest TV Shows of All Time 538.6k VOTES   The funniest TV shows ever range from some of the best TV shows of recent memory to some of the best TV shows of al...
#151 of 202 The Greatest TV Shows for Women 119k VOTES Behold, a complete list of the greatest TV shows for women, ranked by ladies who love to watch television! For stay-at-home ...
#8 of 63 The Best Showtime Original Shows 2k VOTES Showtime is an American premium paid cable television service that has produced a variety of well-known original series, kid...
#22 of 51 What to Watch If You Love 'Ray Donovan' 233 VOTES Wondering what to watch after Ray Donovan? If seasons of intense drama about fixing the crimes of powerful people in this se...
#27 of 44 What to Watch If You Love 'Homeland' 714 VOTES If you just finished Homeland and feel like it’s left a gaping hole in your life, there’s no need to despair. We’ve compiled...
#117 of 149 The Best TV Shows of 2013 34.7k VOTES Best TV shows of 2013 include some of the greatest television shows of all time and serve to remind us that we are, in fact,...
#64 of 74 The Funniest TV Shows of 2013 5.3k VOTES Is there anything better than a TV show that can make you laugh so hard that for a second you can’t breathe? That sort of gu...
#86 of 100 The Best Rainy Day Shows To Watch When You're Bored And Stuck Inside 1k VOTES Whatever reason you're stuck inside, due to rain or some good, old-fashioned social distancing,  you can at least relax...
#15 of 33 What to Watch If You Love 'Sex And The City' 187 VOTES Sex and the City was a fun, funny show about strong women managing work, life, friendship, and relationships while livi...
#46 of 101 The Funniest Shows Streaming on Netflix 49.9k VOTES The absolute funniest shows streaming on Netflix, ranked from the most popular to the least by the Ranker community. This li...
#51 of 121 The Best Dark Comedy TV Shows 35.2k VOTES Do you like your comedy a little darker? This is a list of the very best dark comedy shows on television, ranked from best t...
#82 of 107 The Best TV Shows Set In New York City 1.9k VOTES If you love New York then you're in luck because it is a very popular setting for a television series. It's not just that it...
#11 of 32 The Best 2010s Medical TV Shows 775 VOTES These are the best 2010s medical TV shows, ranked from best to worst by your votes. Medical series have ranked among viewers...
#50 of 105 The Best Comedy-Drama TV Shows Ever 20.1k VOTES The best comedy-drama TV shows, also known as dramadies, provide not only laughs but also heartfelt storylines. They have be...
#30 of 77 The Best Shows For Women On Netflix 3.9k VOTES Whether they feature strong female leads or simply cater to the ladies, the best shows for women on Netflix are aplenty. So&...
#14 of 20 The Greatest TV Shows About Illness 113 VOTES Illness in all its various forms can often be an all-consuming feeling that is scarier and more alienating than anything els...
#14 of 42 The Greatest TV Shows About Hospitals 3.8k VOTES It seems these days, you can't turn on your television without stumbling across a series about hospitals. Whether it's about...
#3 of 10 The Best Shows Featuring The Sopranos Cast 149 VOTES The Sopranos aired on HBO from 1999 to 2007, and in those six seasons the series inspired an entire generation of telev...

Nurse Jackie is also found on...