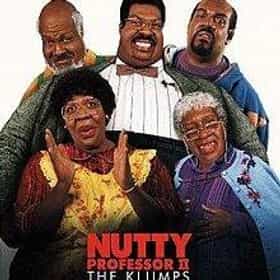 The Nutty Professor II: The Klumps is a 2000 American romantic comic science fiction film directed by Peter Segal. It is a sequel to the 1996 film The Nutty Professor and stars Eddie Murphy. As in the original film, Murphy plays not only the inept but brilliant scientist, Sherman Klump, but also most of Sherman's family. In contrast to the previous film, subplots which are centered on his family occupy a substantial part of the film. Like the first film, the sequel's theme song is "Macho Man" by The Village People, which this time is played during the end credits. ... more on Wikipedia

Nutty Professor II: The Klumps is ranked on...

#116 of 721 People who voted for Nutty Professor II: The Klumps... also upvote Hey Arnold! on The Best Saturday Morning Cartoons for Mid-80s - 90s Kids The Best Black Movies Ever Made, Ranked 671k VOTES The best black movies are favorites that explore African-American culture and themes. This list is ranked by film fans, many...
#40 of 84 The Funniest Black Movies Ever Made 28.4k VOTES Some of the funniest movies ever made feature talented casts of African American actors and actresses. The top black comedie...
#105 of 107 The Funniest Movies Starring SNL Cast Members 3.9k VOTES Which comedies starring former SNL cast members are actually funny and worth watching? Since Saturday Night Live debute...
#45 of 54 The Best Movies About Split Personalities 7k VOTES Oftentimes, the most interesting characters are the ones who are split on a dilemma. The internal struggle can be fun to wat...
#126 of 139 The Funniest Slapstick Movies Ever Made 13.6k VOTES A list of all the best slapstick movies ever made, many of which are streaming on Netflix and Amazon Prime. This slapstick m...
#19 of 45 The Best Eddie Murphy Movies 8k VOTES Here is the list of the best Eddie Murphy movies, ranked best to worst with movie trailers when available. Eddie Murphy got ...
#48 of 50 The Best Romance Movies of 2000 384 VOTES List of the best 2000 romance movies, ranked by how many upvotes they've received by other fans of the genre. If watching me...

Nutty Professor II: The Klumps is also found on...