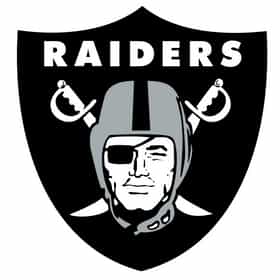 The Oakland Raiders are a professional American football franchise based in Oakland, California. The Raiders compete in the National Football League (NFL) as a member club of the league's American Football Conference (AFC) West division. Founded on January 30, 1960, they played their first regular season game on September 11, 1960, as a charter member of the American Football League (AFL) which merged with the NFL in 1970. The Raiders' off-field fortunes have varied considerably over the years. The team's first three years of operation (1960–1962) were marred by poor on-field performance, financial difficulties, and spotty attendance. In 1963, however, the Raiders' fortunes improved ... more on Wikipedia

Oakland Raiders is ranked on...

#3 of 223 The Best Sport Team Names 34.1k VOTES These are the best sports team in organized team sports, as ranked by the wisdom of the crowd. Anyone can contribute to this...
#7 of 104 Sports Teams With The Most Fanatical Fans 60.7k VOTES A crowdranked List of the most fanatical fans that ever rooted for their team. These are the sports teams with the most fana...
#3 of 20 People who voted for Oakland Raiders... People over 50 are 2x more likely to vote for this also upvote Derek Carr on The Best Quarterbacks in the NFL Right Now The Best Uniforms In The NFL 39.6k VOTES NFL fans love to argue over what team has the best uniform in the league. While to non-football fans this may seems like a...
#16 of 32 People who voted for Oakland Raiders... also upvote Pirates of the Caribbean Franchise on The Most Rewatchable Movies also upvote Jerry Rice on The Best Wide Receivers of All Time The Greatest NFL Teams 136.6k VOTES The greatest NFL teams are those professional football teams beloved by fans and often hated by rivals. These teams are ofte...
#30 of 32 Who Was the Most Disappointing NFL Team of 2016? 2.1k VOTES Not every NFL team can play in the Super Bowl, let alone make the playoffs. Every season, football fans have high ...
#27 of 32 What Team Will Win Super Bowl 50? 6.1k VOTES With the 2015 NFL season coming to a close, it's time to ask the big question on the minds of millions of football fans out ...
#16 of 32 Who Do You Think Will Win Super Bowl LII? 509 VOTES It's no secret America loves football and with the biggest game of the season getting closer each day, the internet is awash...
#47 of 111 The Best Sports Teams Not Named After Animals 2.1k VOTES Sports teams have been named after animals since organized sports have been around, but did you ever wonder how many profess...
#21 of 32 Who Do You Think Will Win Super Bowl LIV? 9.3k VOTES UPDATE: The Kansas City Chiefs defeated the San Francisco 49ers to win Super Bowl LIV. It's time to start making 2020 Supe...
#24 of 32 The Best Fantasy Football Defenses Of 2019 271 VOTES The fantasy football rankings of defenses are always among the toughest aspects of drafting each year. While you're focused ...